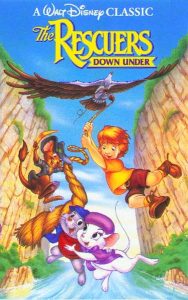 Do you remember Disney’s Rescuers Down Under?
It had that character Frank – a frilled neck lizard. 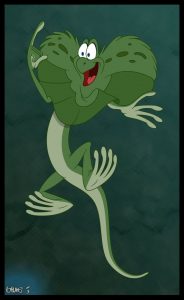 He looks so happy doesn’t he?
In my dream, I was jogging in a nondescript group and others were going around this angry lizard who blocked our path.
Well, my turn comes (like a game of Frogger) and I try to go left and right around the lizard, and it blocks my path both ways. Then, I go for the hurdle and it blocks that path overtop its head. Finally, I decide it’s come to fisticuffs and I jab with my right, and it seizes my fist in this Venus fly trap type of mitt, and I counter with the haymaker left (Southpaw always!) and it snatches that in its mitt too. 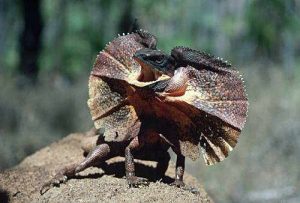 Before I can react too much the lizard pulls me toward itself with 100% gusto and I physically lunge myself awake flying out of my bed and making contact (eye lid first) directly with the nightstand edge. Luckily for me, it wasn’t a direct hit with the stand, because my neck cracked as it was.
But, I hit nose, cheekbone and upper/lower eyelid directly on the stand’s edge. And Leah jerked awake and was like “Are you okay?”
So I went to see the urgent care people and did vision tests, eye dye for testing for lens cuts, and fortunately it was a protected by the good ole eyelid.
They checked for retinal detachment and orbital fractures and the results were clean. I was able to see the chart across the room too.
I made it to work for my first appt. with a kiddo, and I have a nice shiner on the left side. It’s making for some entertaining advising sessions.
My favorite ending to a conversation went:
“It was good to see you, Mr. Tucker. Take care.”
To which I replied, “It’s nice being able to see you at all.”
Categories: brianltucker, thankfulness
Tags: australia, Disney, dreams, humor, scary 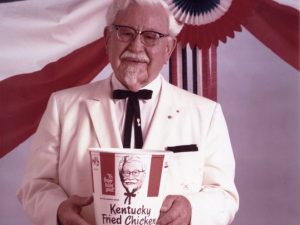 Because I can’t make this stuff up. I’ll just include the link to verify it (and you can thank me later).

You heard that right. Sunscreen that smells like chicken.

Did I already try to register as one of the first 3,000 recipients of a FREE container from The Colonel?

Were they looooong gone?

But there’s always next…wait a minute.

When did retailers start promoting across such odd boundaries?

Was Kentucky Fried Chicken the first to do it?

Does anyone remember the Flavor Radio tactic by Dunkin Donuts in South Korea a few years back? Issuing a commercial jingle which prompted the release of coffee scents into the bus space air and driving store visits up 16% where the “smell-technology” was being implemented.

I laugh, but it’s true. Smell-technology.

I know smell is considered the strongest sense tied to memories, even from our childhoods we can attest to it.

I can still remember the powerful, potent aroma of lemon and orange flavors blending together. Our teachers encouraging us to not sniff too much for fear of brain damage, addiction, or worse, ending up like this guy.

If senses are tied to memories, why doesn’t every company try these peculiar tactics? Maybe they do, and we just haven’t noticed them. Marketing is sneaky.

But, one things for certain: the odder the idea the more likely it seems to stick with us.

Where we learned that jellyfish are 95% water and Maine has 62 lighthouses.

While we didn’t need to know this, the company provided it to us anyway free-of-charge. And these obscure little tidbits gave us conversational pieces all throughout the 90s and beyond. (I’m still talking about them.)

If you see some advertising brilliance on your commute today, be sure to share it. I’ll post it on here. BTW: Chicken-scented sunscreen will be a hard one to top.

Ps. Here’s a picture of Leah and me dressed up as the Colonel (and a bucket of beautiful chicken) from last Halloween: 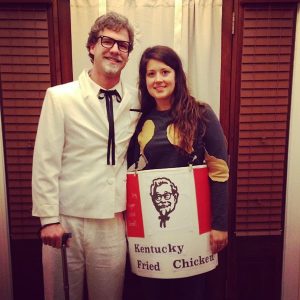 (Marketing so strong, the Colonel got us to dress up and go bowling like this.)

Fun times! Anyways, enough of this. I’m getting hungry. 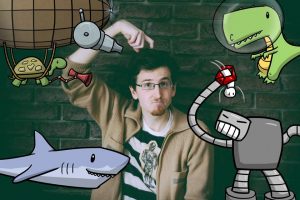 *Part of a 3-book series 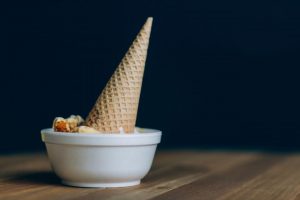 In my infinite wisdom I thought it would be a grand idea to plan a trip abroad.

Thought being the key word here.

My wife had never left the country (beyond cruising to the Caribbean and a trip to Alaska…which let’s be honest…is the equivalent of leaving the U.S.).

So where to start?

A DNA test of course. I told her I needed to know my ancestry before I plunged into a country blindly. So I bought a saliva kit from Ancestry.com and made my mark. (Still waiting on the test results. Can you believe it? When they say 6-8 weeks, they MEAN it!)

Then, I started talking to Leah about her ancestry – Slovenian. (Hey. At least she knows where her bloodline starts.) And I started jonesing about traveling first to her motherland and seeing relatives she didn’t know, before going to mine.

She smiled at the notion, and I admit, I wanted to travel all the more. [Even though I couldn’t tell you a single city located in Slovenia, but I think one starts with a Lub-something…]

Next, I started having dream sequences. Dreaming of Scottish castles and Edinburgh in the winter. Shakespeare plays and moors and moats. All of which sounded nice, even if I wasn’t the least bit Scottish.

But, last night is where I’d like to place the STOP sign of my dumbest moment, when I decided to rent a movie called No Escape from Redbox and subject my lovely wife to what ensued. Have you seen it? No one I know of has either…

Owen Wilson (yes, the man of Zoolander fame) and an actress I didn’t recognize travel to Thailand (or, Cambodia…I’m still not sure which) with their two daughters to relocate as a result of daddy’s new job. Upon arriving, Wilson’s character goes to get a newspaper and stumbles upon an angry mob in the midst of a coup. Wilson and company fight the next two hours against violence waged toward their American/British companies (yes, Pierce Brosnan shows up). The filmmakers love to pander to James Bond fanatics!

But as you can guess, this subject matter did nothing to embrace the notion that Leah and I should travel abroad. The movie featured assassinations and cruel depictions of assault. At one point Wilson’s daughter has to hold a gun against her father and is encouraged to pull the trigger.

Suffice it to say, I didn’t win any brownie points in a.) picking this winner & b.) (and most importantly) encouraging the Tucker family to travel abroad in 2017 or any year

Your friends might be working on that “exciting” NEW thing, but you my friend are persistent. Stick with it (and be happy) unlike grumpy cat. You got this.

Stephen King makes it look easy. I guess it’s because there’s nothing else to do in Maine?

I’ve included my 1st ever BLOG VIDEO on Youtube for you to see! Hope it helps key you in to the exciting developments around this first book of mine, The Silence of Sacrifice. I’m excited to have your readership and support.

“Story is massive. Story is the most powerful tool to compel a human brain. Every human being self identifies as the lead protagonist in the story.” – Donald Miller

“One of the deepest of all human longings is the longing to belong, to be a part of things, to be invited in. We want to be part of the fellowship. Where did that come from?” – John Eldredge, Epic

If writing a book makes one look like this:

Then, editing a book can best be summed up as:

Editing: Is the Worst.

It takes the frustration and painstaking lifeblood of a first draft, bundles it tightly into a little ball, and hurls it at hoop…in the Atlantic Ocean, miles from shore, miles from a life preserver. Side note: Paper isn’t waterproof.

I appreciate your prayers this week, and next, and the next.

No one should have to wear a face like this–for long anyways.

Other days, not so much.

As we walk through this life, we know there is strength in asking others for help. I recommend doing so, before it gets to this point.

Here’s to your (and my) other days!

Only 2 #FREE days left – ‘BAPTISMS & DOGS: Stories’ by B.L. Tucker – on #Kindle and other digital thingies.

Baptisms & Dogs is set in the small town of Seton, Kentucky.

The residents are grumpy, jobs scarce.

In these “slice of life” moments, it’s anything but warm, puppy dog tales. From sunup to sundown, this 581-person town looks over its shoulder, praying for release.

My friends and I use a ‘Bottom 100’ list featured on IMDB (Internet Movie Database).

It features, you guessed it, the worst-rated 100 movies by viewers in all of cinematography. The list changes, but not as often as you’d expect. (The Bottom 100 are just that bad.) We also use other sites with “Worst of All-Time” lists such as: Rotten Tomatoes (summarized by Wikipedia).

Not bragging, but I can safely say we’ve (collectively speaking here) seen more BAD movies than you could ever fathom watching.

Why would I make this claim?

Why do this to ourselves?

For some reason, we are intrigued (like others out there) by BAD movies.

How did this get made? Why would anyone in their right mind direct this? Pay money for this? Sit through 2 hours of this?

We’ve asked the same questions, but all while “in our community” where we feel less bad about ourselves, as we TRY to sit through most of them. There’s a lot to be said for seeing atrocious films with your best friends. (Huggable moment here.) Of the ‘Bottom 100’ we’ve seen approximately half of them.

There have been some real stinkers. And some, we didn’t know if we COULD make it through…to the credits. To date, we’ve only stopped on 1. (I. Don’t. Understand. That. One. At. All.)

But, you’re probably wondering: What in the world is this list? I want to go past the ‘Bottom 100’ and list the ones we’ve sat through. It’ll give a little insight for those curious about self-torture 101. It looks something like this, and I’m sure friends will come to my rescue for the films I’ve neglected:

(It’s not connected to Troll 1, and it’s not about Trolls at all.)

(Those outside the IMDB ‘Bottom 100’ worth noting)

…And the list continues onward (and DOWNWARD), because tons of bad movies are being made–by Director Uwe Boll and others–each and every day.

Not saying it’s for everyone, but watching a bad movie can sometimes be quite the treat. It makes movies like Star Wars even more spectacular, when/if you ever return to good films.

It’s great fun seeing what Netflix ‘recommends’ for you after you’ve added movies like Troll 2. This is where a lot of the ‘discoveries’ are made. Then, you call friends up, ‘Let’s watch In the Name of the King: A Dungeon Siege Tale.’ And they’re like, ‘Your place or mine?’