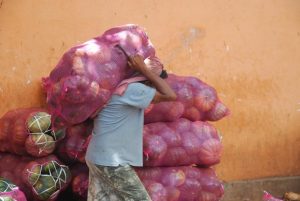 “Utterly alone, at the bottom of a fourteen-foot trench filled with water so thick with silt he literally couldn’t see his hand in front of his face, William Walker laid twenty-five thousand bags of concrete, slitting each bag open so the concrete could spread out as it set. He then used 115,000 concrete blocks and 900,000 bricks to shore up the national treasure we know as Winchester Cathedral.

Every morning, five mornings a week, fifty weeks a year, for six years and one month, from 1905 to 1911, Walker would climb into his diver’s suit and wait while his tenders loaded forty-pound stones over his shoulders and placed a fifty-pound metal helmet over his head. Then he would step into eighteen-pound metal shoes and descend into the depths of the trench around Winchester Cathedral to work for three-and-a-half hours.

After an hour for lunch, he would go through the ritual again in order to work another three-and-a-half hours in the pitch dark completely alone.

Incredibly, the majestic structure that thrills people even today with its remarkable architecture had been built on a bog, floating on what Sir Francis Fox called a “raft” of massive beech timbers. As the timbers rotted, the mighty building started to sag.

Since the water swirled in and out of sites where bubonic plague victims had been buried centuries earlier, Walker also had to worry about exposure to life-threatening infectious materials and the possibility of encountering floating skeletal remains. His response: “I try not to think too much about that.”

So day in and day out, week in and week out, year in and year out, Walker fought to save a structure built by long-dead humans to honor a still-living God.

In a perfect world where happy endings always happen, William Walker would have lived a long life bathed in the adoration of the English people for his unseen labors. In a perfect world, a famous sculptor would craft a statue to sit in the halls of the Cathedral to honor Walker’s name. In a perfect world, visitors to the tombs of William the Conqueror and Jane Austen would see and remember the face of the man who saved an irreplaceable part of England’s history.

Alas, to use the king’s own English, ’tis not a perfect world we rest in.

William Walker would be one of the millions and millions of people felled by the flu pandemic that swept the world in 1918. When the sculptor sat down to craft the monument to Walker, he used a photo of the wrong man, and the Church of England, embarrassed by its error, refused to correct it for almost 90 years.

It isn’t adoration or statues or even the satisfaction of a job well done that is God’s gift to His children.

It’s the work itself!

Hard as it is to imagine, even those things we do in the places nobody can see, even when we’re weighed down by heavy trials, even when we don’t have the joy of the company of coworkers, the labor we’re engaged in is God’s gift to us.

Let the coal miner rejoice. Let the bond trader exult. Let firefighters and architects and school teachers glory in their labor, for God in His infinite wisdom has given them the chance to play a role in shoring up the foundations of a creation built to last forever.

One day, when every knee has bowed and every tongue confessed that Jesus is Lord, every dark hour, every tedious task, every ounce of effort given by God’s children to the tending of His cathedral will see the light of day, and we will know and count it as great treasure that God let us be a small part of His big work.”

– from Randy Kilgore’s Made to Matter