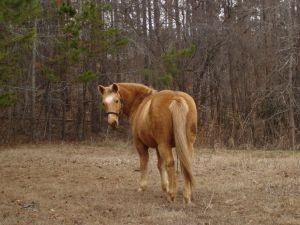 Have I told you about how I grew up on a farm?

(Some of you just read that and probably thought: O boy. Here we go.)

Most of my times were enjoyable on the farm.

But, the item that stands out most solidly was something that started as a love of mine and became (ever-so-gradually) a fear, then full-blown hatred about farm life.

Backstory: I had had the best pony you could imagine. He was part-human, I swear. Like a big, loyal puppy dog. He followed me everywhere. Going on trail rides with my family was a treat. (I even asked if he could come in the house once or twice.)

So, the hunt started and stopped at an auction in central Kentucky.  We found a palomino! (I’d always wanted one of those.)

I wish I could say the story got better.

Ryker’s Brand Gold dust (her official name) became Gold dust and then Babydoll, because me and my brother thought it sounded better.

She was deathly thin when we bought her. Her next stop probably would’ve been the glue factory had we not stepped in.

She gained weight. We fed her non-stop. Then, I started training her. She gained a little life from the food and training. You could see it in her eyes. I was excited to try this new ride, even though I missed my always faithful pony, Arrow.

Babydoll was beautiful. (Just like the color of gold dust when she was let out into our fields to graze, to take in sunshine, and to mingle with the herd.)

Then, I asked the question, “Since she’s trained, could we take her on the next trail ride?”

Then, some proverbial dam bust somewhere in her head.

The happy, content, fat, gold-coated Babydoll went haywire. She refused to cross small watering holes. Started biting other horses. And at one point, she turned and ran through dense trees and brush piles. But, it was obvious she wasn’t just going crazy…she was MEAN. Babydoll tried her hardest to knock me off with branches, tree trunks, and debris. (It was the largest beating I’ve ever sustained on a horse to this day.)

Fast forward to the evening, and I was devastated. We let her graze with the rest, and we left it at that. The next day, my brother and I were going out to fill the water troughs, and Babydoll perked up her ears. Neither Jared nor I thought much of it, because most of the herd loved to check out the water tanks.

But, she did a bit more. She lowered her head and lunged at us. Jared was faster and scaled a fence and looked back. He saw me getting rammed by the rock-like head of the horse. Luckily it knocked me sideways in my run, and I didn’t take the brunt of her force. I recovered and sprinted to another gate and hopped over just as she smacked that gate with her head.

She had become a demon (almost overnight).

Then, we talked about it as a family. We thought she’d come out of it. But, deep down I felt otherwise.

Over the next 2 years, we watched her give birth to foals. Then, we watched her kick at them non-stop and refuse to let them nurse. Luckily, we had other mares to let Babydoll’s offspring choose from.

The trail rides became worse and worse. She kept trying to do the “fling off” method. Rather than enjoy the trips, I just spent most of my weekends whipping her and trying not to die.

1.) I became great at dodging disasters/death every Sunday

2.) Babydoll took on a constant Hulk-like persona among the other horses.

My family agreed that my sole job was to keep Babydoll from killing the others in the herd. Talk about great riding motivation. But, I did.

Babydoll was hateful, and I missed Arrow, the pony. It was night and day between the two animals’ personalities. Maybe it’s what caused me to steer away from farm life. Either way, I know that Babydoll is somewhere today wreaking havoc upon some other poor soul.

Arrow at 20-something years of age is still offering rides and helping to train the future riders of America! (You should visit him at a stable in Monticello, KY.)

To you Arrow, I say, “Thank you for the many miles, compadre!”

To Babydoll, “No one liked you when you were angry.” (Hulk reference)