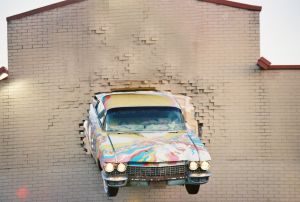 The word riot (noun) is – a wild disturbance from a large crowd. But did you also know it can be a noun used to reference ‘unrestrained laughter’? To say someone is a riot is to reference their hilarity, their good qualities.

Riot – originating from Medieval Latin riota which means “quarrel, dispute, uproar” was first seen in 13th century times. But, of course, these actions were seen way before the 1200s. Because, we as people, have been messing up long before the USA even existed.

Today, my thoughts are with the Baltimoreans.

Just because a word (or, phrase) is coined from a previous language and integrated into our current system of speak, doesn’t mean the actions weren’t present well before words were on-hand.

I know we have a range of readers, and I appreciate all of you each week. Today, I just wanted to discuss the inevitability of imperfections running rampant on our streets.

Whether they be U.S. streets or a small, dirt-packed trail worn by foot traffic in Zimbabwe, we all have an affinity for messing up. Again, I couldn’t help but admire the courage of those trying to regain order in the news footage.

The mom who literally whipped her kid in public did what a great mom should: love. Maybe a little bit late? Maybe in a less than ideal environment? But, hey, it’s there. It’s present in her eyes. She’s not letting him get away. Sure, he (and others) might go unnoticed by law enforcement and the public’s eye, but she’s a reminder that he knows what actions…what riots can do when loved ones are hurt.

For some of us, watching a riot video “from home” might be as close as we ever come to this action. For others, just yesterday, you were on the front lines maybe tempted to pick up a rock and hurl it at someone. Loot CVS.

Either way, the choice remains yours at the end of each day.

To make your world, family, and loved ones better by being “the riot of the party” and uniting others in a greater purpose, the greatest cause–love,

to threaten others with quarrels, disputes, and violence for violence’s sake.

Baltimore is just our current, 4/27/2015 example of hate winning out. Let’s turn the other cheek from here all the way to Zimbabwe today, 4/28/2015, and show others (no matter the cost of appearing weak) that love trumps evil every time.

Even if it doesn’t look that way from the television screen.